After two days, five flights (including crossing the Andes) … 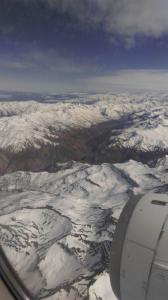 …and seven airports we arrived in Punta Arenas in the far south of Chile, just on the Straits of Magellan.

Our cosy Bed-and-Breakfast ‘El Chalet Chapital‘ in the centre of town:

After a brief wander around town we found a little row of restaurants on Calle Bernard O’Higgins and had a tasty if somewhat haphazardly delivered dinner comprising salmon and octopus ceviche and empanadas, while being entertained by a small child dressed as Super Mario – presumably this is the equivalent of all the small children in Barcelona who insist on wearing their Carnaval costumes to school all week. Craft beer seems to be as much of ‘a thing’ here as in Europe so I gave the Austral Pale a go. Not bad.

In the restaurant we picked up a leaflet advertising a scale model of the James Caird which I was intrigued by, having fond-ish memories of watching with my father the scenes of frost-bitten toe removal in the now forgotten 1980s TV Drama Shackleton. Thus inspired we headed the next morning to the Nao Victoria museum, most famous (apparently) for its scale model of the Victoria, one of the five ships that comprised Magellan’s expedition to complete the first circumnavigation of the world.

It was actually pretty interesting, not only because we managed to negotiate public transport to get there (it’s 7km out of town). 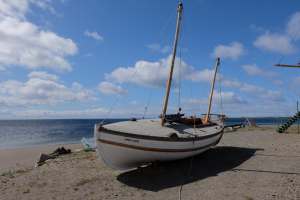 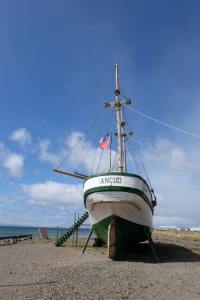 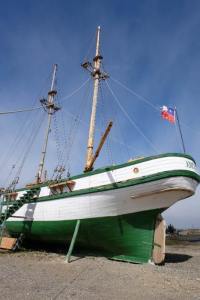 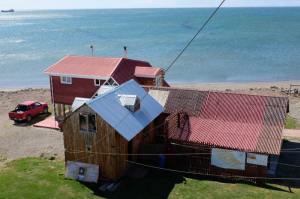 We even managed to hitch a lift back into town with a guy who was taking a side visit from a work trip to visit the museum – perfect timing.

One pleasing discovery was that the ‘menu del dia’ is a a staple here as well, so we settled into ‘El Broccolino’ (after determining that it wasn’t actually a vegetarian restaurant) for a lovely lunch in what turned out – within a few minutes of us placing our order (perfect timing #2 of the day) – to be a bustling restaurant filled with people from local offices enjoying a Friday leisurely lunch. 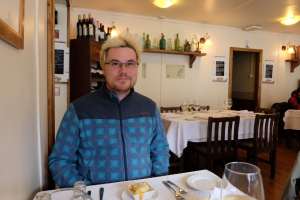 One downside of this bustley-ness was that we couldn’t discreetly snap a picture of their specials board, which was a shame as it featured ‘Nuptial Shrimps with asparagus drunk on champagne’. We may have to return tomorrow to see if it is still on the menu…

Look! The Straits of Magellan!: 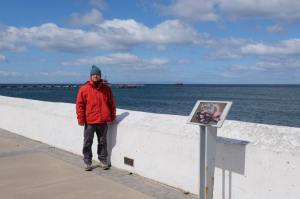 Plaza Williams. Named after Juan (I kid you not) Williams, 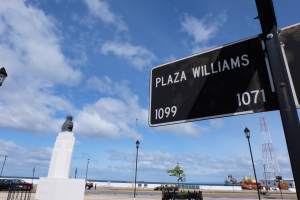 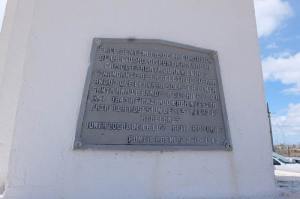 Then we got distracted by the charming Cafe Tapiz: 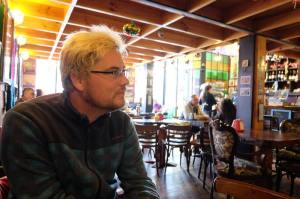 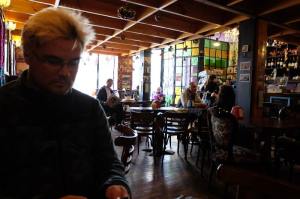 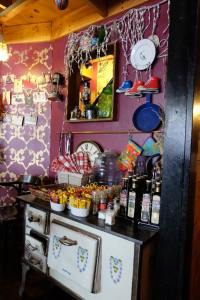 I approve of this – if you are going to provide sauces in sachets then provide scissors to snip them with! 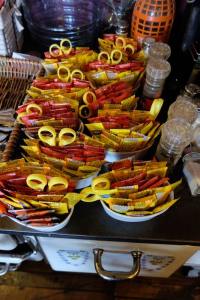 Cutsie details on the bar (yes I am playing with my new camera!)

While a lot of Punta Arenas is fairly ugly low-rise, there are a few stylish buildings from the 19th and early 20th century, and a lot of ‘blue plaques‘ (local equivalent thereof): 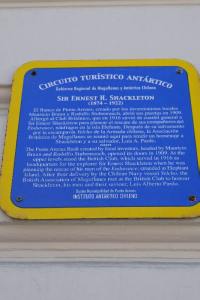 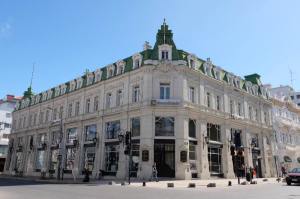 Her former home now houses a cultural museum, a pub and a rather fancy hotel with a lovely bar and sunroom: 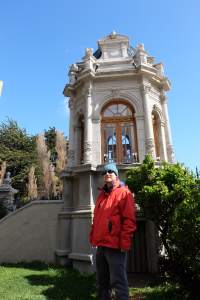 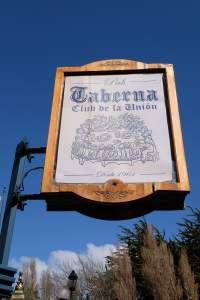 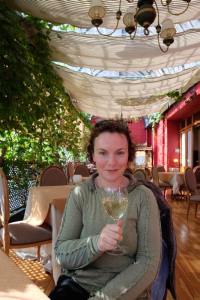 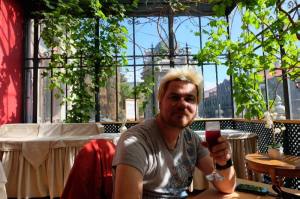 Oh yes, and there was a children’s fancy dress parade. Obviously. 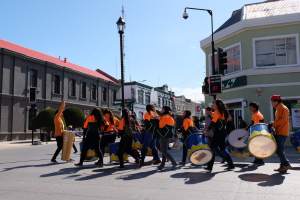 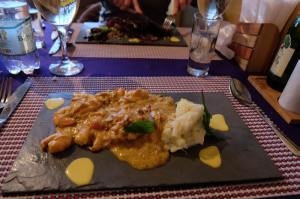 …and on the way home we saw some guerilla knitting:

This is the view from the ‘Mirador’ (viewpoint or lookout) on the hill above Punta Arenas – various signposts point the way and show the distance to cities – and in some cases football teams(!?) – around the world. 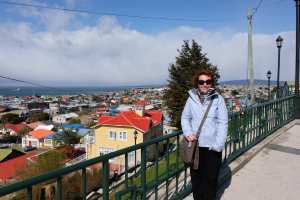 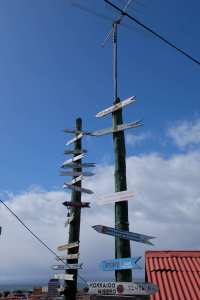 Next we headed into town with the idea of walking along the promenade following the straits, but as it was pretty windy and there was ‘a lot of weather’ happening, we somehow ended up at a supermarket buying provisions for our hiking trip. Interesting factoid: supermarkets in Chile don’t provide plastic bags, not even ones you can buy. Everyone brings their own reusables or you can pick a cardboard box from a pile by the tills (like in Kwik Save when I was a child!). We ended up buying a fabric bag from the kiosk for 800 pesos (about 80p or just over a euro). 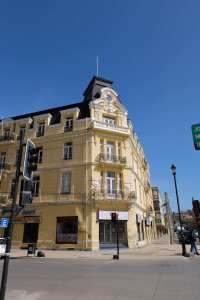