El Chalten is a small town 3 hours drive from El Calafate, near to the border with Chile. It’s known as the ‘National Trekking Capital’:

mainly because that’s the only reason the town is there – it’s inside the Glaciers National Park and has access to many one-day and multi- (up to 10!) day hikes as well as a great deal of challenging climbing.

Mount Fitzroy is one of the highest peaks – it’s just hidden in the clouds in the photo below. Cerro Torre (the needle-like peak in the centre of the photo) which is the highest of a chain of four, wasn’t summitted until the 1970s.

We bagzied the top deck front seats on the bus for a panoramic view of the approach to El Chalten – luckily the weather mostly played ball: 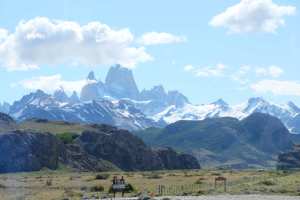 The view from the hotel window wasn’t bad either:

As the hotel was on the highest spot in town, understandably picture windows were a feature:

indeed the whole place was stylish, and the ‘live music’ in the piano bar in the evenings turned out not to be some dreadful folk-songs played on a bontempi organ, but actually a very talented chap playing and singing bossanova and jazz standards. Very classy. 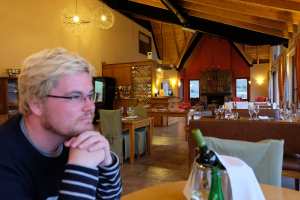 As the thing to do in El Chalten is hike, we got ourselves a map and a packed lunch and started with a 22km circuit around some lakes:

We were impressed by the route marking and signage. As someone who has accidentally ended up in a field of angry bovines on more than one occasion while hiking in the UK I appreciate a good signpost.

We did get some more sunshine over the next few days so here are some better views of the mountains: 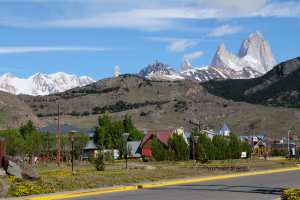 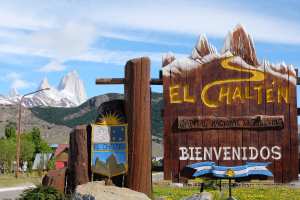 On the Sunday it was ‘Dia Verde’ or ‘clean-up day’ so we did our bit helping out with the litter picking, although not as much as this chap and his accompanying kayaker did, fishing rubbish out of the river:

And speaking of fishing, Noah managed to get a free 5-day provisional license as the current season’s licenses hadn’t yet reached El Chalten (it *is* remote!) so flung a few lines into the Rio de las Vueltas, although sadly without much success.

We hiked to the nearby waterfall where Noah was pretty sure he saw some brown trout in the water but didn’t manage to find a suitable spot to fish from; as the shortest and easiest walk (especially if a bus brings you to a parking spot about 500m away!) it was rather busy so we spent more time taking pictures of groups of tourists than admiring the waterfall and the beautiful clear water: 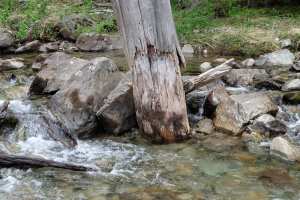 On a recommendation from the hotel we tried the grilled patagonian lamb special at El Viejo Nando – it was pretty good, even if Noah does – rightly – look a bit intimidated by his!

Although subsequently we discovered that where food is concerned our hotel was actually the best deal in town on a price/service/quality ratio, with a chef who’d worked with the Adria brothers.

There are plenty of decent bars in town, including a couple of micro-breweries, and this one that demonstrates the town’s obsession with climbing:

Here’s one more charming view of the mountains from town: